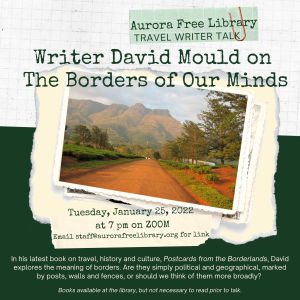 Aurora Free Library hosts historian and journalist David Mould for “The Borders of Our Minds” virtual presentation with Q & A on Tuesday, January 25, 2022, at 7 pm on a journey to borders, both real and imagined.

In his latest book on travel, history, and culture, Postcards from the Borderlands, David explores the meaning of borders. Are they simply political and geographical, marked by posts, walls, and fences, or should we think of them more broadly? Some borders, set by surveys and treaties, take no account of geography, language, and culture. There are borders within countries—physical, economic, or social. And finally, there are the borders of our minds—the way we may think of unfamiliar places.

David’s journey begins with maps and cartoons that poke fun at how we view other parts of the US. He moves on to the carve-up of Africa, the artificial (and often straight-line) borders drawn by colonial powers. In South Asia, he explores what The Economist called “the world’s craziest border” between India and Bangladesh. He ends up in Central Asia, in that gerrymandered jumble of former Soviet republics whose names end in -stan.

David Mould, Ph.D., Professor Emeritus of Media Arts and Studies at Ohio University, has traveled widely in Asia and southern Africa. Born in the UK, he worked as a newspaper and TV journalist before moving to the US. His travel essays and articles have been published in Newsweek, Christian Science Monitor, Times Higher Education, and History News Network.

Kirkus Reviews describes David as “a genial travel guide … an academic who does not write like an academic.” Rick Steves, in a recent interview for his radio show, said: “Monsoon Postcards reads like you’ve got a friend who’s really connected and committed to these cultures.”

Pick up a copy of his Postcards from the Borderlands book at Aurora Free Library if you are interested (not necessary to attend the talk).

Email staff@aurorafreelibrary.org for the ZOOM link.

Get Yourself Something & Support the Library

Click the link below to make a purchase at Amazon, and a small donation goes to the library.